Climate change has impacted Human lives for long and in a variety of ways.

While the calamity might have hit a few in the form of rising seas, melting glaciers, incessant rains, landslides or through simply obscure games at play like food shortages, frequent pandemics, reducing fertility rate, increasing anxiety etc.

But it is the first time a study has calculated true statistics of lives to be lost alone in this century due to climate change: 83 million to suffer and perish in the name of rising temperatures caused due to emissions made by world Industries and economies.

The study has also focused on the mortality cost attributed to climate change, that can probably lead to an increase in the price of carbon pollution and influence change across the markets.

This research done by Columbia University’s Earth Institute can help the companies and governments to assess and ascertain the mortality cost of the decisions made by them in the near future.

A participant involved with the study explains: “Based on the decisions made by individuals, businesses or governments, this tells you how many lives will be lost or saved”.

“It quantifies the mortality impact of those decisions” by reducing questions down “to a more personal, understandable level.”

According to the calculations made considering the current global-warming trajectories, the future direct heat deaths can wipe-out a population equivalent to that of Germany.

On an average, every 4,434 tonnes of emitted carbon in 2020 is just enough to kill a person in the current century. In other way, emissions made by three random U.S. residents over their lifetimes is estimated to render death to another person on an average.

Also, the per-reviewed calculations have estimated that the planet may witness the warming of 4.1 degrees Celsius by 2100, all derived on current measures and restraints.

This, in no way, includes, deaths from rising seas or superstorms, crop failures or changing disease patterns triggered by atmospheric warming.

How can this metric be of help to us?

Although all the nations, big or small, industrialized or the ones just thriving, are affected by the perils of Climate change and its effects, yet a few countries are most vulnerable.

And therefore, the highest mortality rates will be cornered by the hottest and poorest countries in the Middle East, Africa and South Asia.

This will seemingly include India.

With the new statistics shadowing the markets, the world economies will have to change their conventional ways of calculating social cost of carbon.

Higher costs on carbon emission can lead to better trading or offsetting and even larger emission cuts. This can save a few lives to be dispensed.

Only if we could limit the global average temperature increase to just 2.4 degrees Celsius by the end of this century, it can help save a staggering 74 million people from dying due to excessive and intolerable heat.

Transitioning from Social cost of Carbon to Mortality cost of carbon:

The social cost of carbon (SCC) is an approximation in dollars of all the economic damages resulting from emission of a single tonne of carbon dioxide into the atmosphere.

In other words, it indicates the today’s worth of avoiding these impactful damages projected in future.

SCC is used to assess whether the costs and benefits of any proposed policy to limit the climate change are justified.

Although the SCC should increase with time because generally, the socio-economic perspectives worsen and new environmental stresses are formed when impacts of climate change accumulate.

On the country-wide level, India’s SCC stands at maximum $86 per tonne of CO2. This means that Indian economy will lose $86 each time it decides to emit a tonne of CO2. 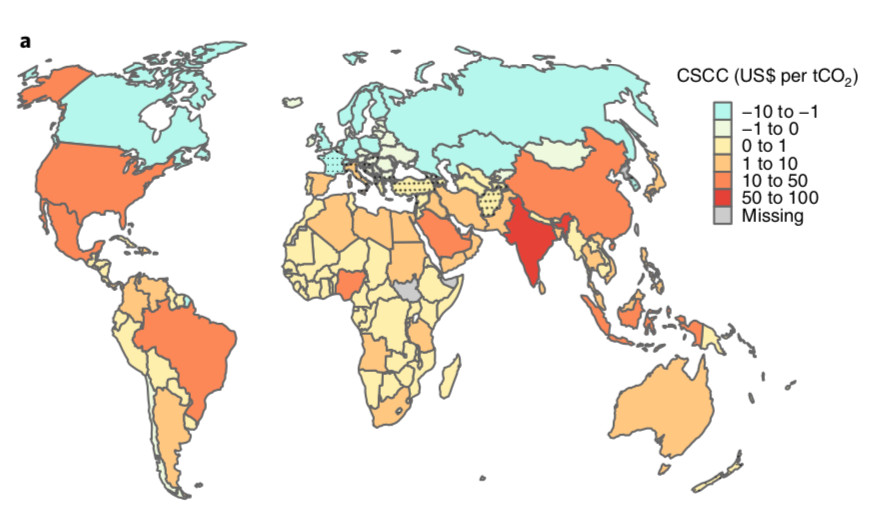 SCC finds relevance when a policy having the potential of emission-increase gets formulated. Its final cost will reflect the SCC as it gets multiplied to the tonnage increased by that policy.

“The SCC is very useful and essential in rule-making and how it is currently being used in the federal government.”

“If you want to know the damages caused by a ton of carbon, and make sure that any rule or project that we do ends up being beneficial for society, you need the social cost of carbon in order to do that”, explains a research associate.

SCC is undeniably important in curbing climate change, yet many experts consider it be inadequate.

But a 2017 National Academy of Sciences report recommended ‘mortality’ as a clear damage source that can be immediately updated in the estimates.

Including such a grave parameter has led to the updated cost to be around $258 a tonne, in case the world’s economies wish to reduce deaths caused by global warming in the long run.

Principal differences: While SCC measures all damages, MCC is only concerned with the marginal emissions and relevant excess deaths. SCC holds a monetized value while MCC does not anyhow monetize deaths, it involves no discounting or valuing lives.

What can a government do in this regard?

Individual efforts matter but what mobilizes a change, are government policies.

Every nation’s government will need to assess and calculate the impacts of their actions and shall formulate “large-scale policies such as carbon pricing, cap and trade and investments in low carbon technologies and energy storage.”

In turn countries with significant corruption, like India, can begin with proper implementation of the policies devised with lesser complexities for private firms engaged in trading or offsetting.

Accounting for the supposed “mortality cost of carbon” can provide the environmental polluters some innovative reasons to clean up, causing the cost of emissions to rise up.

India’s Landslide saga and why India needs to be concerned as these are surely not the lasts or worsts
Thunderstorms and Climate change: Scientists warns of this collusion hitting the upper atmosphere and NASA investigates
Comment