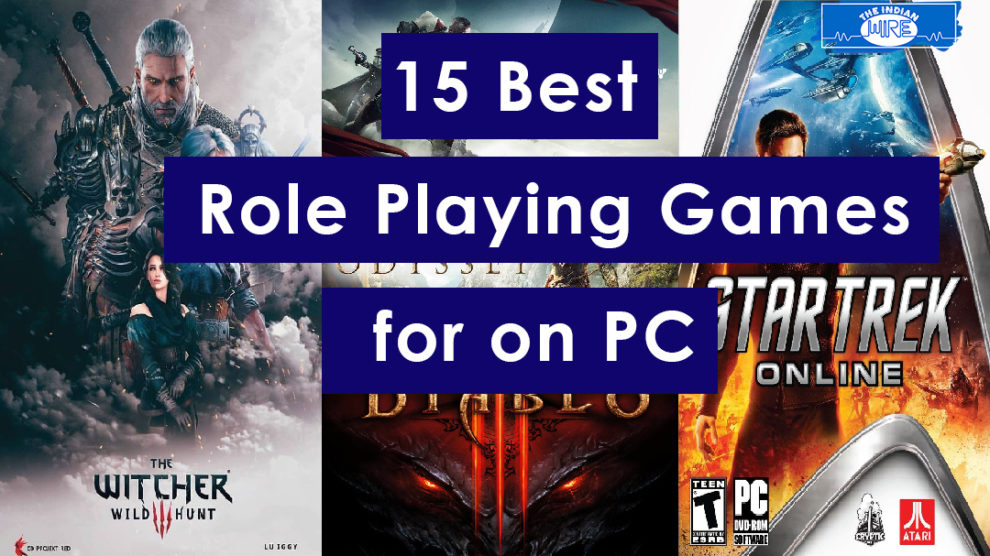 Role-Playing Games (RPGs) are the best, they take you to a whole new fictional world. RPGs are favorite of everyone, whether you are new a pro. In RPGs, you are given the responsibility to complete a particular task. There are so many RPGs in the market and in the internet. Some of them are free and some come with a subscription fee, it is always hard to choose the best game so here is the list of the best RPGs to Play on a PC:

The Witcher 3: Wild Hunt is one of the best Role-playing games. In this game, you will be playing as Geralt of Rivia, a monster hunter (known as a witcher) who is looking for his missing adopted daughter on the run from the Wild Hunt. You will get to fight so many mysterious and magical creatures in the game. Apart from the main storyline, the game has side quests too. Completing these quests will reward you experience points and gold, which can be redeemed as Power-ups. The game is available at the Steam Store for ₹400.

This is the latest game from Mass Effect game Franchise. The game is set in the Andromeda Galaxy during the 29th century, where humanity is planning to populate new home worlds as part of a strategy called the Andromeda Initiative. Here you will play as Scott or Sara Ryder, an inexperienced military recruit who joins the Initiative and wakes up in Andromeda following a 634-year journey. In the game, you will have to find an new homeworld for humanity while also dealing with an antagonistic alien race known as the Kett. The game is available in the official EA website.

The third game from the Diablo franchise was released in 2012 for PC. The game may be old but its frequent updates keep it fresh. In the game, you can choose to play as one of seven character classes – Barbarian, Crusader, Demon Hunter, Monk, Necromancer, Witch Doctor, or Wizard – and are tasked with defeating the Lord of Terror, Diablo. You can download the game from here.

Final Fantasy is one of the longest game franchise. The game takes place in the fictional world of Eos; aside from the capital of Lucis, all the world is dominated by the empire of Niflheim, who seek control of the magical Crystal protected by Lucis’s royal family. Here you will play as Noctis Lucis Caelum, who goes on the quest to find the magical crystal that Niflheim was able to steal. The game is available at the Steam Store for ₹2099.

5: World of Warcraft: Battle for Azeroth

The game is the seventh installment in the World of Warcraft series. Battle for Azeroth is an action-packed World of Warcraft expansion, that shows the conflict between the Alliance and the Horde. The game has pretty great graphics with a decent storyline. The game can be bought from Amazon.

This is the fourth installment in the Borderland series. The game is all about Killing or looting the enemy. It is one of the best MMO RPG for PCs. The levels of Borderlands 3 take place on multiple planets. The plot is centered around stopping the cult-leading twins, Troy and Tyreen Calypso, from harnessing the power of the alien Vaults spread across the galaxy. The game is available in the Steam Store and Microsoft Store.

Assassin’s Creed is one of the most loved game franchises. Odyssey is the 11th main game from the series and 21st in total. The game is set in the year 431 BC and the story is about the fictional history of the Peloponnesian War between Athens and Sparta. You can play as a male or a female mercenary who is trying to unite his/her family. The game can be downloaded from the Steam Store for ₹2999.

Star Wars: Knight of the old republic is based on the Fictional universe of Star Wars movie Franchise. The story is set four thousand years before the Galactic Empire where hundreds of Jedi Knights have fallen in battle against the ruthless Sith. In this game, you will play as a Jedi in order to defeat Sith and save the Republic. The game is available at the Steam Store for ₹349.

The game is set in the fictional world of Rivellon, centuries after Divinity: Original Sin. People of Rivellon have a special form of Energy known as Source. The story of the game revolves around Lucian.  He has to defeat Braccus Rex in order to bring peace in the city of Rivellon. The game is exciting and takes you to a whole new world of fiction. You can download the game from Steam Store.

The game’s story takes place in the fantasy world of Eora, mainly inside the nation of Dyrwood. Where every newborn is infected by a recent phenomenon in which they become “hollowborn” upon birth, meaning they are born with no soul. The objective of the game is to find out what caused this infection and how to solve the hollowborn problem. The game is available at the Steam Store for ₹729.

Path of Exile is developed by Grinding Gear Games. In this game, you will play the character of an Exile. Where you will be struggling to survive on the dark continent of Wraeclast, as you fight to earn power that will allow you to exact your revenge against those who wronged you. The game is available at the Steam Store.

Star Trek Online is based on the Star Trek movie franchise. The game is set in the 25th century, 30 years after the events of Star Trek: Nemesis. Since the launch of the game, the developer has launched multiple expansion packs such as Legacy of Romulus, Delta Rising, and Agents of Yesterday. If you are a Star Trek fan, you should try this game. The game is available at the Steam Store.

3: The Lord of the Rings Online

The Lord of the Rings Online is based on the movie series with the same name. The game’s storyline is presented as a series of “Books”, which consist of series of quests called “Chapters”. You can create characters of four races and seven classes and adventure throughout the region of Eriador. The game is based on the Middle earth so you will experience that time and place. The game can be downloaded from the Steam Store.

The game is developed by Bungie. It is Set in a science fiction world where you will play the role of a Guardian, protectors of Earth’s last safe city. He has the power of Light that helps him in keeping the city safe. Guardian will have to fight Dominus Ghaul in order to keep his city safe. The game is available at the Steam Store.

The game’s story revolves around Korthos Island. Here you will fight with Sahuagin and his army to end his rule on the Island. During the adventures of this game, you will fight with dragons and other magical creatures. The game has a points system, earning these points will help you in upgrading the power of your character. The game is available at the Steam Store.

List of most popular, top 15 Best Racing games to play on a PC
PUBG now available on Google Stadia
Comment