The Indian Wire » Gaming » List of most popular, top 10 Superhero games for PlayStation 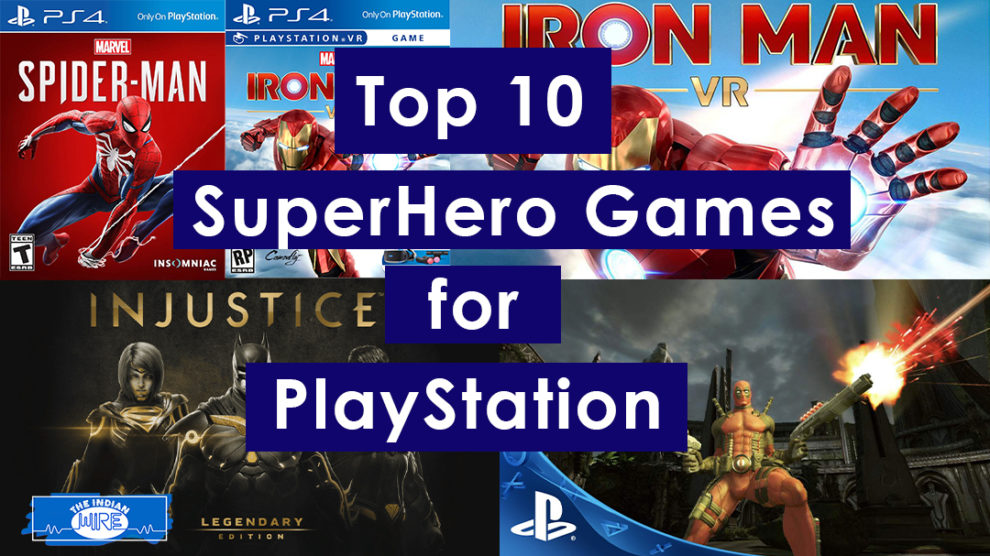 Superheros are the Pop Culture of this generation. We love to watch superhero shows, movies and we want to play the video games of our favorite superhero characters. There are so many videos games based on a superhero from either Dc or Marvel comics, so if you have a PlayStation and you want to play some of the best superhero video game, here are the top 10 superhero Video games:

Assemble a team of heroes like Batman, Flash & Wonder Woman to combat the forces against you. Master new combos and crush opponents in dynamic 3-on-3 battles. Upgrade your Super Heroes with special powers as you fight your way through the game. Become a champion by collecting gear for your characters and dominating your foes in PvP contests. Choose your side and play now. The game is available at Amazon.

Batman faces the ultimate threat against the city that he is sworn to protect, as Scarecrow returns to unite the super criminals of Gotham and destroy the Batman forever. Batman: Arkham Knight is an action-adventure game set within an open-world Gotham City, which can be explored freely by the player from the beginning of the game, allowing them to travel seamlessly anywhere within its boundaries. You can play as the best detective in the world and you will get his gadgets such as the grapnel gun, line launcher, batarangs, the countering system, Detective Vision, and Remote Hacking Device. You can buy the game from Amazon.

Batman: The Telltale Series is a 2016 episodic point-and-click graphic adventure video game. The game is based on Bob Kane and Bill Finger’s Batman character. In the game, you will play as Batman against villain Penguin. The game has all the major characters from the Gotham City like Commissioner Gordon, Harvey Dent, and Catwoman. The game is available at Amazon.

Batman Arkham VR is developed by Rocksteady Studios and published by Warner Bros. Interactive Entertainment. The game is based on DC comics and is a part of the Batman: Arkham series. The gameplay is short, you can complete the game in an Hour. Here, players can fight Penguin, the mutated Killer Croc, and the Riddler. You can buy the game from Amazon Store.

Mortal Kombat vs. DC Universe is a crossover fighting video game between Mortal Kombat and the DC Comics fictional universe. The game is also the eighth installment in the main Mortal Kombat series, despite the story not being connected to the first seven games or any other game that was released after this one. The game was followed by a Mortal Kombat reboot in 2011 and by Injustice: Gods Among Us in 2013. You can play as Batman, Captain Marvel, Catwoman, Deathstroke, The Flash, Superman, Wonder Woman, and many more characters. Buy the game from here.

Marvel’s Spider-Man is a 2018 action-adventure game. In the main storyline, the super-human crime lord Mister Negative orchestrates a plot to seize control of New York City’s criminal underworld. When Mister Negative threatens to release a deadly virus, Spider-Man must confront him and protect the city while dealing with the personal problems of his civilian persona, Peter Parker. The graphics of this game are better than any other Spiderman video game. The game can be purchased from Amazon.

Deadpool is a superhero action-adventure video game. By default, Deadpool is armed with both guns and swords, but he also has access to giant hammers, plasma guns, and a range of other alternatives. A short-range of teleportation is also possible in this game. The game shows the fight between Mister Sinister and Deadpool. The game can be purchased from the Amazon Store.

Marvel’s Avengers is an upcoming action-adventure video game. The game will be able to play offline as a single-player experience or online with up to four people. The story of the game revolves around Avengers and their struggle to prove themself innocent after an attack and the death of Captain America. The game will be available here.

Marvel’s Iron Man VR is an upcoming shooter video game developed by American studio Camouflaj and published by Sony Interactive Entertainment. After several years as a world-famous Super Hero, Tony is attacked by the mysterious Ghost, a hacker and anti-corporate activist who repurposes old Stark Industries weapons. Tony will have to save the world and his empire from the ghost that will lead him to ever-escalating stakes and a final showdown. The game will be available at the PlayStation Store.