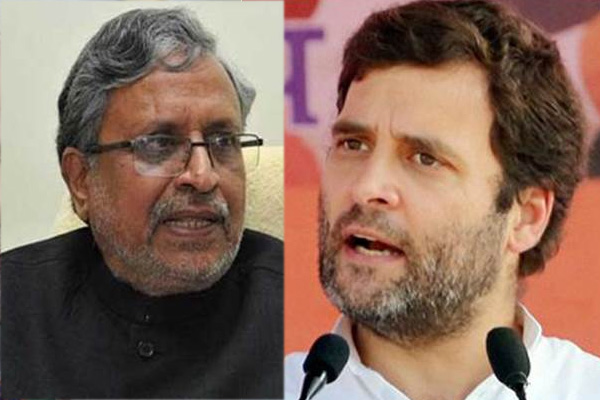 Bihar Deputy CM said he will sue Congress President Rahul Gandhi for passing remarks mentioning that all thieves have the surname Modi. Speaking to reporters, Sushil Modi said, “I will file a defamation case against Rahul Gandhi in Patna high court within two days… Is it a crime to have Modi surname?”

Taking a jibe at Narendra Modi himself Rahul at his rally in Maharashtra had asked as to why every thief has the surname Modi. “But tell me one thing… Nirav Modi, Lalit Modi, Narendra Modi. How come they all have Modi as a common name?”

Talking about his statement, Madan Lal Saini, Chief of Rajasthan‘s BJP unit said that this was an insult a particular section of the society.

Earlier his ‘Chowkidar Chor Hai’ was used as an instrumental attack on PM Modi being a thief. Earlier BJP MP Meenakshi Lekhi had come up against Rahul Gandhi for his statement mentioning that the Supreme Court had accepted that Prime Minister Narendra Modi is a thief following which the Supreme Court gave its statement.

The SC had said in its statement, “We did not say any such thing (chowkidar chor hai). We make it clear this court had no occasion to record any view or finding or make any observation as allegedly attributed to the court by the respondent (Rahul Gandhi)… No views, observations or findings should be attributed to the court in political address to the media and in public speeches, unless… recorded by the court.”