The Election Commission on Sunday released the schedule for General Elections 2019 that will take place in Seven Phases starting from April 11 to May 19, 2019. While the results for the mega battle is slated to declare on May 23.

The Country will vote in a total of seven phases to elect a new Lok Sabha. Voting for the First Phase will begin on April 11.

Addressing the presser, Chief Election Commissioner Sunil Arora Said informed that approximately 10 lakh polling stations in this Lok Sabha Elections are set up as compared to 9 lakh polling stations in 2014 General Elections. He further added that Nearly 900 million (90 crores) voters will be eligible to vote for 543 Lok Sabha constituencies across the country along with 5 million voters are in the 18-19 age group.

He further added the Model Code of Conduct will come into effect from today itself across all 543 seats.

As expected, CEC announced that state assembly elections of Andhra Pradesh, Arunachal Pradesh, Sikkim and Odisha will be held simultaneously along with Lok Sabha Polls.

State Polls in Andhra Pradesh, Sikkim and Arunachal Pradesh will be held on April 11 along with General Elections, while Odisha will have polling in four phases – April 11, 18, 23 and 29.

However, The Poll Panel made it clear that Jammu and Kashmir will not vote for electing its state government along with General Elections. The Poll Panel who had earlier this month visited the valley cited security reasons behind not clubbing State Polls with Lok Sabha Polls. “Based on input, a constraint of availability of central forces&other logistics, a requirement of forces for the security of candidates in wake of recent violence & keeping other challenges in mind EC has decided at this stage to announce the only schedule of Parliament election in J&K,” CEC Sunil Arora said as quoted by ANI.

Andhra Prades, Tamil Nadu, Uttarakhand are among states that will go the polls in a single phase. Bihar, Uttar Pradesh and West Bengal will go to polls in seven phases while in Jammu and Kashmir polls will be in five phases. The Central States like Madhya Pradesh, Jharkhand, Maharashtra and Odisha will have General Polls in 4 phases. 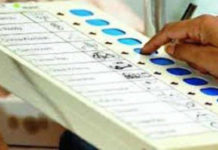