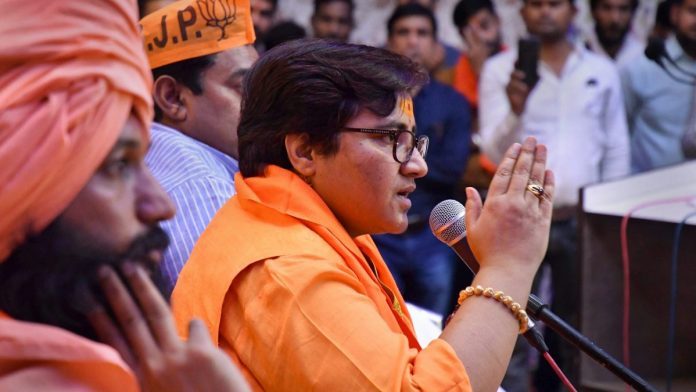 The Poll body found her remark ‘she is proud of Babri Masjid’s demolition’ in a violation of the model code of conduct. The poll panel in a statement said that it “strongly condemned” her remarks”. It also issued warning to Bharatiya Janata Party Candidate not to repeat the misconduct in future.

Responding to the Ban imposed on her Sadhvi Pragya said, ‘I respect the decision.’

The ban would come into force from 6.00 AM, May 2 (Thursday) and would continue for the next 72 hours.

It should be noted that Pragya Thakur in a run-up to the national elections 2019 had said Hemant Karkare was killed in the 26/11 Mumbai terror attack because of her “curse” as he “tortured” her when during the probe in the Malegaon blast.

He was the Chief of Anti Terror Squad (ATS). She had also made a controversial remark about the Babri mosque.

Sadhvi Pragya has been charged in the Malegaon Blast. She is currently out on a bail in the case. Ever since Sadhvi Pragyna nominated for Bhopal, she had made many controversial remarks and the party is facing intense criticism from the opposition for this.

Earlier on April 27, Congress alleging Sadhvi Pragya of seeking votes in name of Army and filed a complaint with the Poll Commission.

Sadhvi Pragya in a run-up to the national elections 2019 is facing Congress Stalwart  Digvijay Singh from Bhopal Lok Sabha Seat.

Bhopal Lok Sabha Seat is considered as a stronghold of the saffron party. BJP had held the seat 8 times since 1989, Congress had last won an election in 1984 on the seat. BJP’s Alok Sanjar is the sitting MP from the seat.