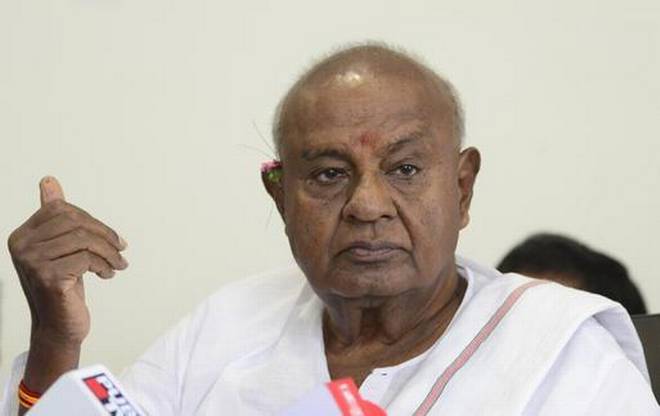 Amid a tussle between Janata Dal-Secular and Congress in Karnataka‘s coalition government, JD-S Supremo and Former Prime Minister HD Deve Gowda on Friday said that there is a full possibility of having Mid-Term elections in the state.

Talking to media in Bengaluru, JD-S Stalwart HD Deve Gowda said, ‘There is no doubt that there will be mid-term polls. They said they will support us for 5 years but look at their behavior now. Our people are smart’.

Former PM & JDS leader HD Deve Gowda in Bengaluru: There is no doubt that there will be mid-term polls. They said they will support us for 5 years but look at their behaviour now. Our people are smart. #Karnataka pic.twitter.com/OjGsy2lKYW

He added that ‘I will continue to work and rather won’t blame anyone’. Earlier on Tuesday, CM HD Kumaraswamy said that he cannot even express the pain he gone through everyday, hinting that everything is ‘not well’ between Congress and JD-S.

While Gowda’s remarks came at a time when many Lawmakers were reported disgruntled while many have been awarded ministerial berths to keep the coalition government intact.

The Congress-JD(S) Coalition Government in the state is facing rough patches ever since it is formed last year. Congress after Karnataka State Polls last year has extended Support to JD(S) and Chief Minister HD Kumaraswamy with an aim to keep BJP out of the power.

The Congress-JD(S) together has 117 MLAs in Karnataka Assembly earlier with Congress 80, JDS 37 and one from BSP, while BJP has 105 in the 224-member Assembly. The halfway mark is 113.