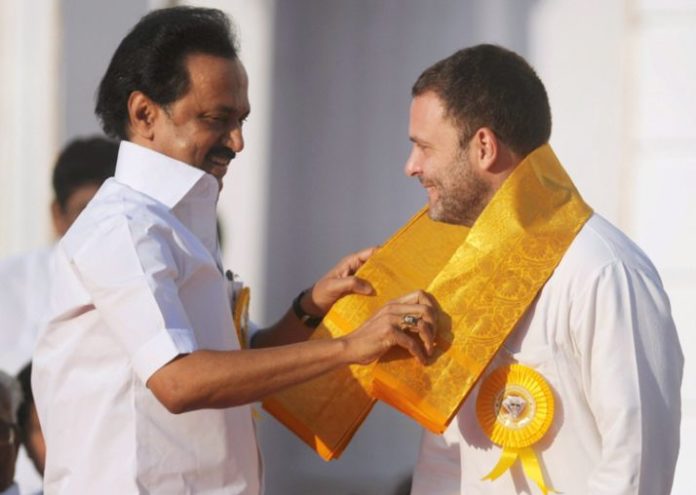 DMK who has inked an alliance with Congress and other small parties in Tamil Nadu for the General Elections already released its list of 20 Candidates in Tamil Nadu. DMK who has kept a lion share of 20 seats fielded Kanimozhi from Tuticorin Parliamentary seat. This will be her first time in the electoral politics, M Kanimozhi, Daughter of DMK patriarch M Karunanidhi had in past been a Rajya Sabha Member.

Apart from DMK, its other alliance partner in a run-up to the mega battle of ballots have also announced candidates on all 40 seats, 39 Parliamentary Seats of Tamil Nadu and a lone seat of Puducherry.

As per the poll pact, the Rahul Gandhi led party has been offered nine seats in the state, and a single seat of Puducherry. While DMK has decided to field its candidates on 20 Lok Sabha seats. The DMK has allotted one seat each to the MDMK, IJK, IUML and the KMDK. It has also allotted the MDMK one Rajya Sabha seat, the election for which is scheduled for June.

3. Dayanidhi Maran (DMK) from Chennai Central – Two time MP From the Same Seat, lost in 2014 Polls. He has served as Union Minister handling different Portfolios under UPA-I and UPA-II.
4. Arcot Kalanidhi (DMK) from Chennai North: Chief of Party’s Medical wing, and a doctor by Profession. He is the son of former State Minister Arcot Veerasamy.
5. Thamizhachi Thangapandian (DMK) from Chennai North: First Time in the electoral fray, poet and dancer by profession.
6. Thol Thirumalavan (VCK) from Chidambaram (SC) – Third Time in Electoral Race, lost in 2014 while got the first success in his first election in 2009. Chief of VCK.
7. PR Natrajan (CPIM) from Coimbatore: Won in 2009 Lok Sabha Polls, while shifted to fifth position in 2014.
8. TRPS Ramesh (DMK) from Cuddalore

12. Gautama Sigamani (DMK) from Kallakurichi: He is the son of former State Minister Ponmudi. First time in the electoral fray.

14. H Vasanthakumar (Congress) from Kanyakumari: A two-time MLA and currently represents Nanguneri constituency of Tirunelveli district. Lost to Pon Radhakrishnan in 2014. He is also the uncle of BJP state President and Thoothukudi candidate Tamilisai Soundararajan.

15. Jothimani (Congress) from Karur: She lost 2014 national elections and 2011 state elections. She will take on Deputy Speaker of Lok Sabha and AIADMK’s Thambidurai.

20. AKP Chinnaraj (Kongunadu Makkal Desiya Katchi) from Namakkal: Will be contesting the mega battle on DMK’s rising sun symbol, and has been a member of the KMDK for the past ten years.

21. A Raja (DMK) from Nilgiris (SC): Former Union Minister A Raja is a four-time MP, having won from Perambalur three times before moving to Nilgiris Parliamentary Constituency in 2009. He, however, lost to the AIADMK in 2014 General Elections.

22. TR Pachamuthu (Indhiya Jananayaga Katchi) from Perambalur: Chief of the party IJK, was with BJP Alliance in 2014 however swap it to join DMK Congress ahead of the mega battle of ballots.

27. TR Baalu (DMK) from Sriperumbudur Seat: A five-time MP and a former union minister from the DMK.

29. SS Palanimanickam (DMK) from Thanjavur Seat: District secretary of the DMK in Thanjavur and a five-time Parliamentarian.

31.  K Jayakumar (Congress) from Thiruvallur (SC): Congress Working President K Jayakumar will contest from the Thiruvallur Lok Sabha constituency as a part of the DMK alliance.

37. Kadir Anand (DMK) from Vellore – He is the son of former state Law Minister Durai Murugan and current DMK Treasurer.

39. Manickam Tagore (Congress) from Virudhunagar: The Congress Secretary for Karnataka, won in 2009.

The DMK led alliance will take on the ruling AIADMK alliance of which BJP is a part.