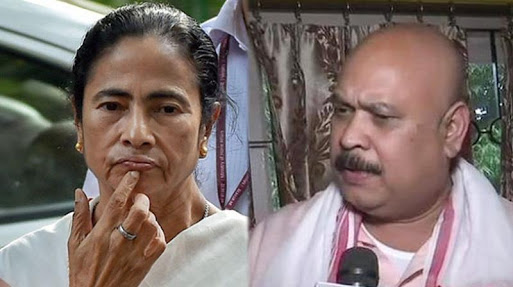 Amidst Trinamool Congress eight-member team being “manhandled” by the Assam Police in the Silchar Airport, TMC Assam President Dwipen Pathak and two other leaders on Thursday resigned from the party. Their resignation is a form of protest against West Bengal Chief Minister‘s aggressive stance towards the NRC list which was published earlier this week.

Pathak’s resignation comes as a major blow to the party whose chief Mamata Banerjee has been vehemently opposing the Assam draft NRC which excludes over 40 lakh people.

Pathak was a TMC legislator from Hajo constituency in the Assam assembly from 2011 to 2016, he told the media, “Banerjee has been trying to project that NRC is an exercise to drive out Bengalis from Assam. The NRC is a fruit of long years of the struggle of the people of Assam against illegal immigrants from Bangladesh … I will not accept anyone trying to malign the image of the state”, reported TOI.

He came in support of the NRC and denied Banerjee’s claim that the list is against the Bengalis and Biharis of Assam. He said, “TMC’s claims that NRC aims to throw away the Bengalis out of Assam is something I do not agree with. The NRC has dropped several names but the citizens can re-appeal.”

He expressed his disgruntlement towards TMC’s protests against the NRC. Former Assam TMC chief said, “There is no use of creating noise over it. This might affect the law and order in Assam and it may also give rise to conflicts between the Assamese and Bengalis in Assam. The blame would then be put on me as the state unit’s party chief. This is why I have decided to resign. I will always speak in favour of Assam”, reported The Indian Express.

Pathak also condemned Banerjee and said, “Why is she trying to make Assam a scapegoat so that she can save TMC’s political existence in West Bengal? I don’t have the moral right to remain a member of such a party under such a leader.”

Pathak also told the reporters that he had made the party aware of the “ground realities” of Assam and dissuaded Banerjee from sending a delegation to the state. He said, “The party did not pay heed to my suggestion and refused to understand the ground situation here. In this backdrop, it is not possible for me to remain in a party that does not value the Assamese sentiment.”

TMC soon came to save face and tweeted, “The Assam unit “President” has ‘resigned’ 3 or 4 times earlier. The unit in that state was being reconstituted. This is not the time to play politics. People first. Humanity first.”

Pradip Pachani of Sibsagar and Diganta Saikia of Golaghat also resigned from the party. Saikia has also threatened to file a case against TMC supremo Banerjee for taking an “anti- Assamese” stand.