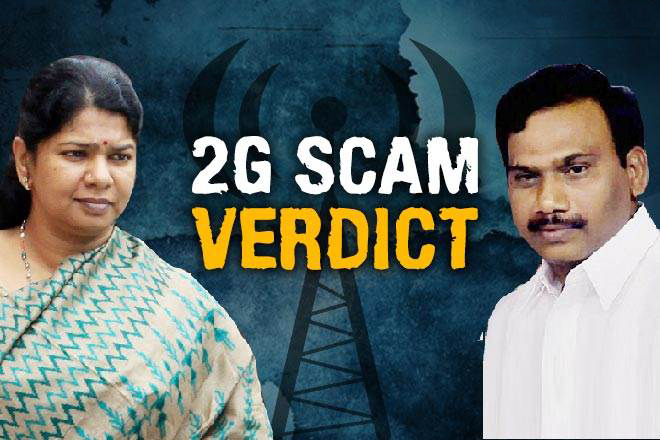 A Raja, M Kanimozhi & 15 others were acquitted today of charges in what was described as India's biggest telecom scandal, the 2G scam.

The Delhi court on Thursday morning acquitted all the 17 accused in the 2G spectrum case, including former telecom minister A Raja and DMK leader M Kanimozhi. Judge OP Saini, hearing the case in Delhi today said that the CBI had failed to provide adequate evidence against the accused and hence they are acquitted by the court.

He said that “I have no hesitation in holding that the prosecution has miserably failed to prove the charges and all the accused are acquitted of the charges.” While the Congress is celebrating the verdict of the court, BJP is underling that back in 2012 the Supreme Court held that the 2G policy of the Congress-led government was “corrupt and dishonest” and canceled all 122 licenses handed by former telecom minister, Raja.

The Supreme court in 2012 had canceled 122 licenses for mobile phone networks allocated by former telecom minister A Raja, stating that the airways were wrongly given to companies without a transparent bidding process.

Former Prime Minister Manmohan Singh, who’s UPA government was charged with allegations of corruption after the verdict said that “The judgement speaks for itself…I am glad the court has pronounced unambiguously that all this massive propaganda that was being done against the UPA was without any foundation.” The UPA government after two consecutive terms was defeated in 2014, and one possible reason listed was one of India’s biggest telecom scandal, the “2G scam”, for which the 17 leaders were charged with allegations of corruption.

The Congress members including Manmohan Singh are of the view that “to companies without a transparent bidding process.”

Meanwhile, Union Finance Minister Arun Jaitley mocked that the Congress was taking today’s verdict as a badge of honour and considering that the 2G policy of the UPA government was honest policy. “This was a corrupt, dishonest policy was upheld by the Supreme Court in February 2012. Each and every case of spectrum allocation was quashed by the Supreme Court as unfair and arbitrary,” he said.

Further making scathing attacks on today’s verdict, Arun Jaitley said that “From this entire scam, who is liable? I am sure investigating agencies will have a close look at it and decide… The fact that this was a corrupt policy intended to promote corruption and there was a loss goes by the Supreme Court verdict and subsequent auctions.”
The allegation of the 2G scam came to light when in 2010 the national auditor or CAG alleged that the 2G licenses given to the telecom operators back in 2007-08 were sold out at throwaway prices.
Appreciating today’s verdict, former Finance Minister P Chidambaram said that “One thing is clear the allegation of a major scam involving highest levels of govt was never true, not correct and that’s been proved today.”
While Congress leader Kapil Sibal demanded that Vinod Rai the former national auditor or CAG who had made the allegations should be sacked. He also said that Prime Minister Narendra Modi clarify the government’s stand in Parliament, which is in session. “Unfortunate the country had to go through this. Many NPAs in banks have accumulated due to this as telecom licences were cancelled. It hit the banking and telecom sectors, it hit the economy. All because of BJP and Vinod Rai,” Kapil Sibal said. The Congress leader had replaced A Raja, and while taking over had assured and claimed that nothing wrong was done. Celebrating the court’s verdict today he added that “Our zero loss theory on 2G spectrum allocation has been vindicated.”
After former telecom minister A Raja along with M Kanimozhi, and the daughter of DMK chief M Karunanidhi were acquitted, the party said that “Victory begins now. With political motives, this case was put in us. Conspiracies were hatched against us but all have been blown away now.”