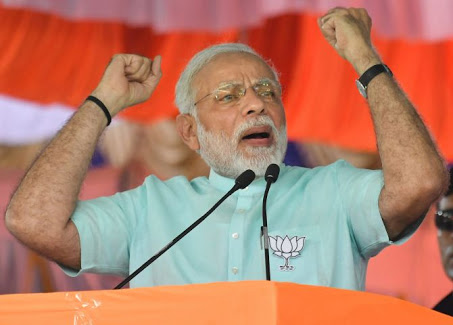 With the upcoming Lok Sabha elections 2019, all the parties have geared up, putting all their efforts to perform well. Not lacking behind is Bharatiya Janata Party, who will again be using Prime Minister Narendra Modi’s face to win these elections.

BJP has announced that PM Modi will participate in 50 rallies across the country by February 2019 covering more than 100 constituencies, as reported by the NDTV report.

He addressed a rally in Punjab yesterday which marks the beginning of his 50 rallies. He will next address a farmer’s rally in Uttar Pradesh. Apart from Lok Sabha constituencies, Modi will also address rallies in Rajasthan, Madhya Pradesh and Chhattisgarh for the upcoming state elections.

BJP President Amit Shah, Home Minister Rajnath Singh and senior leader Nitin Gadkari will also address 50 rallies each. Each rally will be designed in a way to cover 2-3 Lok Sabha constituencies as per the reports. At the end of these rallies, BJP will have covered 400 constituencies.

BJP is all set to tackle the Lok Sabha elections, now we have to wait for the announcement of Congress’ campaign.

Mehbooba Mufti warns of outcomes if BJP tries to break PDP
“BJP is the only party which respects its alliance partners”, says Shah after confirming alliance with JD(U)
Comment