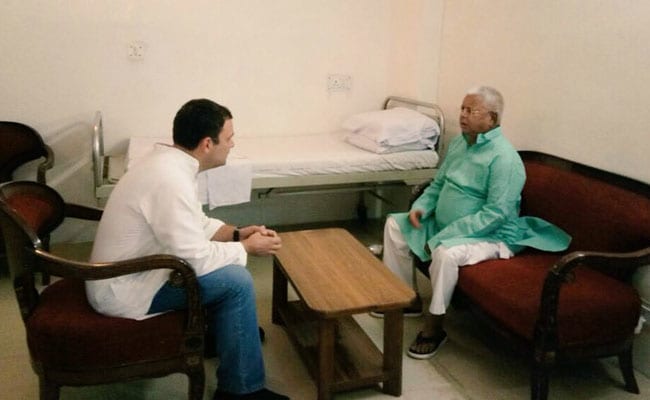 Congress President Rahul Gandhi who is slated to address a Poll rally in Ranchi on March 2 is expected to meet Rashtriya Janta Dal (RJD) Chief Lalu Prasad Yadav to give a final push to the Opposition Alliance in Bihar. It is expected that Gandhi’s meeting with RJD Chief Yadav will end the deadlock between the parties that have erupted over the seat-sharing issue.

If Reports to be believed, Jitan Ram Manji’s Hindustan Awam Morcha is escalating its demand which RJD not relenting. Meanwhile, Congress is looking for 12 Seats in the state that sends 40 parliamentarians Lok Sabha Polls.

Rashtriya Dal Janta(RJD) Chief Lalu Prasad Yadav who is currently in the admitted in the Rajendra Institue of Medical Science (RIMS) under Judicial Custody in Ranchi, will be informed about the final formula. Bihar sends 40 parliamentarians to the Lok Sabha.

Rashtriya Lok Samata Party (RLSP) chief Upendra Kushwaha may settle for five
seats and one seat for CPI. In this formula, Manjhi has to settle for one seat and he is seeking green pastures across the fence, sources said.