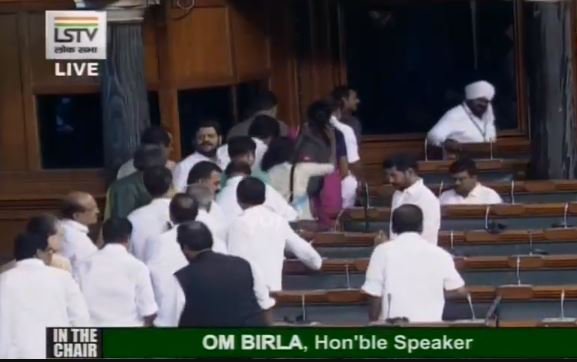 Following which the uproar, the Rajya Sabha was adjourned till 2 pm.

While a similar scene was seen in the Lower House of the Parliament with Congress and its Tamil Nadu ally, DMK, staged a walkout from the House over the Karnakata Political Developments.

The Congress MPs in Lok Sabha walkout of the House in protest against the political situation in #Karnataka. pic.twitter.com/8wJuuTjxiq

Congress Lok Sabha Leader Adhir Ranjan Chowdhury slammed Bharatiya Janata Party. Speaking in the Lok Sabha, Chowdhury said, ‘Poaching of MLAs is a threat for Democracy and this type of politics is dangerous. This should be stopped’.

He further said that the ruling party is saying that they will take Karnataka in their fold and Madhya Pradesh next on cards. ‘This type of politics is dangerous for democracy’, Chowdhury said.

The quick turn of events comes days after 11 MLAs from Congress–JD(S) ruling coalition meet Assembly Speaker on Saturday and tendered their resignation giving a big blow to the coalition government.

With the resignation of 11 MLAs of Congress-JDS and 2 Independent MLAs, the coalition government reduced to a minority with 104 MLAs which is 9 less than the required figures.