The Indian Wire » Science » Arch : A hidden payload aboard Falcon Heavy from SpaceX

During the launch of Falcon Heavy, Elon Musk’s personal cherry colored Tesla roadster was in headlines almost everywhere, but this historic rocket also carried another payload within it almost nobody knew about.

Concealed inside the Tesla roadster is kept a small mysterious object which is designed to last for millions of years, even in challenging conditions like that of space or other celestial bodies. This small object is called the Arch, which is a tiny storage gadget built to store long-term data, holding libraries of information encoded on a small disc of quartz crystal, which is slightly bigger than a coin in size. 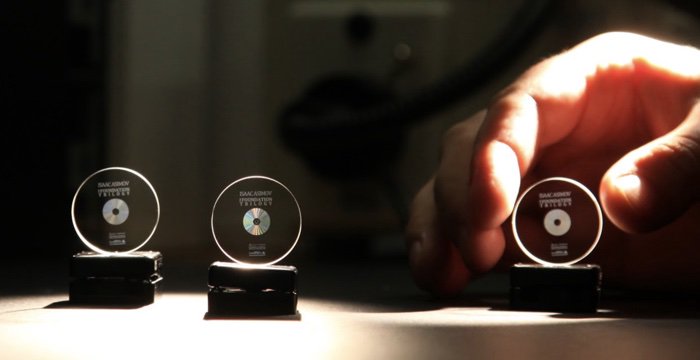 According to the Arch Mission Foundation, who is responsible for making these arches, they can “preserve and disseminate humanity’s knowledge across time and space, for the benefit of future generations”.

The arch, more or less, looks like a small CD or DVD, or even Blu-Ray for that matter. But its capacity to store data goes way beyond any of those discs. The arch can hold up to 360 terabytes of data!

These discs are much more impressive because not only do they hold the capacity to carry an extensive amount of data, but also their physical logitivity is spectacular. The first two discs – Arch 1.1 and Arch 1.2 are the longest-lasting storage devices, which are expected to last stably up to 14 billion years. This is possible because of the ‘5D data storage’ inscribed by laser nano-structuring in quartz silica glass.

It’s a mission perfectly aligned with the goals of the Arch’s developers, who have named this maiden disc launch the ‘Solar Library’. “The Solar Library will orbit the Sun for billions of years. Think of it as a ring of knowledge around the Sun. This is only the first step of an epic human project to curate, encode, and distribute our data across the Solar System, and beyond.” said co-founder Nova Spivack.