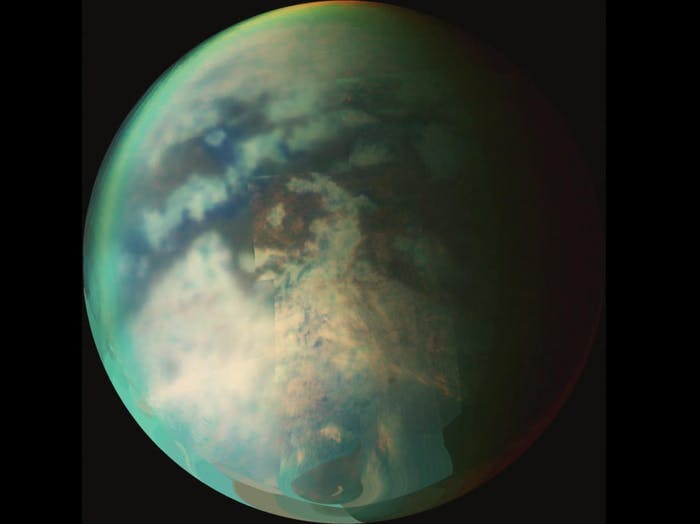 Scientists and researchers from Washington State University and NASA have started working on a space vehicle that could explore and investigate the ethane and methane oceans of Saturn’s wildest moon – Titan. The temperatures of these oceans drop to as low as -184 degrees Celsius.

Titan is the largest moon of Saturn. It is the only moon with a dense atmosphere and the only space object other than Earth where clear evidence of liquid surface has been found. It is the second largest moon in the Solar System.

The possibility of hydrocarbon seas on Titan was first suggested based on Voyager 1 and 2 data that showed Titan to have a thick atmosphere of approximately the correct temperature and composition to support them. Later, Cassini, a joint venture of NASA, European Space Agency and Italian Space Agency, entered the Saturn’s orbit on 2004 and discovered Kraken Mare that is the biggest body of liquid of the surface of Titan, in its North polar region.

Titan Mare Explorer (TIME) is proposed as a lander for Titan. TIME is a relatively low-cost, outer-planet mission designed to measure the constituents on surface and extraterrestrial sea. It was proposed by NASA in 2009.

There’s clearly a lot more work to be done in order to develop something that could survive the harsh conditions on Titan, this is a significant first step. There’s so much to learn about the unusual moon. The team hopes that after 20 years from now, they’d be able to send the submarine spacecraft to Titan.

NASA’s New Horizons breaks record by taking the Most Distant Pictures Ever
Arch : A hidden payload aboard Falcon Heavy from SpaceX