Bollywood actress Nushrat Bharucha is giving up her glam avatar for her next. The actress is playing a home science student ‘Ma’ from a college of Mathura sporting desi look in the quirky comedy ‘Dream Girl‘. The actress will be seen opposite Ayushmann Khurrana.

Nushrat will be seen in simple salwar kurtas in the film, impressing her love interest with her culinary skills.

A source close to the development, informed: “She will also be speaking in a Braj accent.” Nushrat recently shot for a Janmashtami song with Ayushmann ‘Radhe Radhe’ which was choreographed by Ganesh Acharya with 500 backup dancers.

The source also revealed, “The shooting has wrapped up except for one promotional song which will be choreographed by Ahmed Khan in a Mumbai studio in April. Besides the lead pair, it also features Annu Kapoor and Manjot Singh with Ayushmann in a female avatar.”

In Raaj Shaandilyaa’s ‘Dream Girl’, Ayushmann Khurrana plays a female in the film like those people who traditionally played Sita in Ramleela and his character has the unique talent of taking out voices of both male and female.

Speaking about his role the actor revealed that the film is about a guy who plays Sita in Ram Leela. Khurrana called the film and his role really unique and really interesting as he gets to wear a saree in the film. Gulabo Sitabo Trailer: A quite Comical yet Governmental Affair 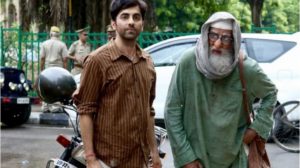 Here’s everything we know about Amitabh-Ayushmann starrer ‘Gulabo Sitabo’