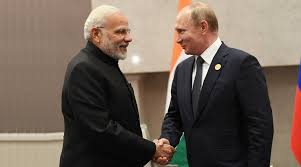 Vladimir Putin is on a two-day visit to India for Russia- India 19th annual summit from October 4, 2018. During his visit to India, he will be meeting the Indian Prime Minister Narendra Modi, Indian President Ram Nath Kovind, as well as to attend the Russian-Indian business forum.

The meeting between the Indian Prime and Russian President is scheduled at 11:00 over various issues like energy, spaces, defense sector, the top agenda being signing a $5 billion deal to buy Russian S-400 air defense system deal. The meeting will be accompanied by top officials from both the sides and with respect to India, Minister of External Affairs Sushma Swaraj, and Defense Minister Nirmala Sitharaman and other officials.

For India, the Russian deal is of great importance as The Russian S-400 air defense deal system, the world’s most lethal surface-to-air missile, from Russia amid a threat of sanctions from the US. Over the years, the relations between India and Russia have rapidly grown amidst global tensions from the western side.

“In this fast-changing world, our ties have grown at a fast pace. With time, the relations between our countries have gone from strength to strength,” PM Modi said in a joint statement with Mr Putin.

We have agreed to step up cooperation with India in combating the menace of terrorism and drug trafficking,” said Mr Putin, who is being accompanied by a high-level delegation comprising Deputy Prime Minister Yuri Borisov, Foreign Minister Sergey Lavrov, and Trade and Industry Minister Denis Manturov.

New Delhi had already indicated that it will go ahead with the S-400 deal notwithstanding the US sanctions. “As and when the government approves it, delivery (of the missiles) will be in 24 months,” Air Chief Marshal BS Dhanoa has told reporters.

Under a new law — Countering America’s Adversaries through Sanctions Act or CAATSA — the US imposes sanctions on any country that has “significant transactions” with Iran, North Korea or Russia.