Counterpoint has done research on the Indian smartphone market shipments. Even though the outbreak of COVID-19 has led to lockdown, the shipment has grown by 4% annually in the 1st quarter(Q1) of 2020. More than 31 million unit smartphones have been sold during Q1. There were new launches and also promotions were made aggressively by all the companies which had led to this growth. However, it has also seen a decline of 19% in March due to the COVID-19 outbreak. This resulted in overall Q1 growth to 4%.

According to the research Q1, 2020 is dominated by Xiaomi with a 30% share, and again it’s not a big surprise. Second place is acquired by Vivo with175 share and then it is followed by Samsung, Realme, Oppo with the share of 16%, 14%, 12% respectively. The remaining smartphone manufacturer’s share is 11%. Xiaomi saw a 6% YoY growth in the 1st quarter of 2020. It is the highest ever market share for Xiaomi since 2018. Vivo Y series has become popular due to its performance and positive word of mouth. This lead to the growth of its market share by 40% YoY in Q1 2020. Samsung almost lost its control over mid-range smartphones before the release of A and M series. After a great hit of the A and M series helped Samsung to gain its market again. 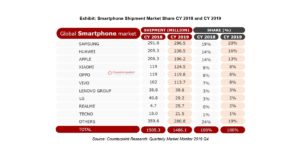 Due to the release of the iPhone 11, Apple also witnessed a growth of 78%. Many offers and discounts were given by Amazon and Flipkart which made the iPhone 11 to have the largest sale in ultra-premium segments.

Availability of smartphones at affordable prices, there is a decline in feature phone markets around 24% YoY in Q1 2020. The list as follows given by Counterpoint.

New iPad pro with 5G support and mini-LED display to launch in 2021
With all powerful A13 chip, iPhone SE races ahead of all Android phones in similar price range
Comment