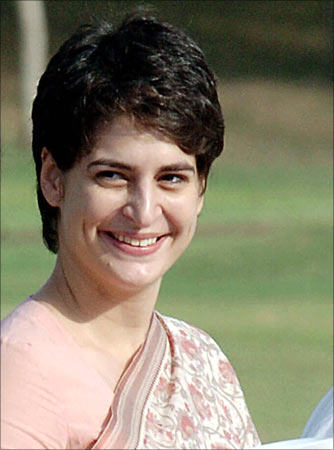 Expressing support to the student’s ongoing protest over Anti-Citizenship Act, Congress leader Priyanka Gandhi joined the demonstrators at India Gate on Friday evening. Speaking on the legislation, Priyanka Gandhi said that the Citizenship Act and the proposed National Register of Citizens are against the interests of the poor.

As quoted by ANI, she said, “Citizenship Amendment Act and NRC are against the poor. They will be most affected by it. What will the daily-wage laborers do? Demonstrations should be held peacefully.” The nation is witnessing daily protests against the Citizenship Act that seeks to grant citizenship to Hindus, Sikhs, Jains, Parsis, Buddhists, and Christians, if they had run away from the religious persecution from the neighboring nations such as Pakistan, Afghanistan, and Bangladesh and came to India on or before December 31, 2014.

Many opposition parties have iterated their support to the Anti-CAA movement. AIMIM (All India Majlis-e-Ittehad-ul-Muslimeen) leader Asaduddin Owaisi has also called a mass public meeting at Darussalam on December 21. Congress party’s general secretary KC Venugopal had also announced to organize a flag march under the banner of “Save India, Save Constitution” on December 28.

Raising voice in SOuth India,  Dravida Munnetra Kazhagam chief MK Stalin said that his party will organize a rally against the Citizenship Act on December 23 in Chennai.