However, it is still not clear what both the bigwigs discussed in the meeting.

Earlier on Saturday, Bihar Chief Minister Nitish Kumar speaking in the NITI Aayog meeting pitched for his demand to give special status for Bihar.

He further requested the Centre to scrap the centrally sponsored scheme (CCS) from the state and proposed an alternative provision for the implementation of schemes named ‘Central Sector Schemes’.

He further pointed out that the centre’s contribution earlier was 75% to 90% for this CCS, however, now these schemes are running with the proportional ratio of 60:40 ratio (Centre: State).

Apart from Bihar Chief Minister, CMs of many states were present in the 5th NITI Aayog Council meeting.

Prime Minister Narendra Modi chaired the fifth meeting Niti Aayog’s Governing Council on June 15. However, this was his first meeting after storming back to power in the recently held national polls. 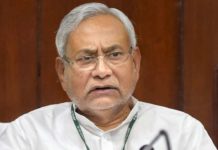