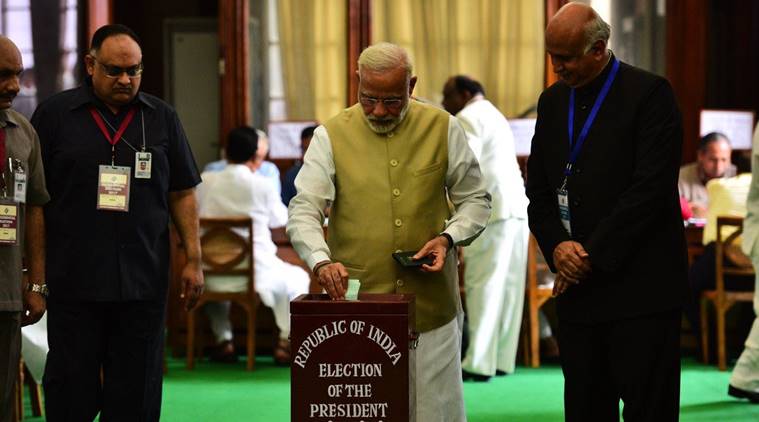 All the details about the Presidential Elections 2017 contested by NDA candidate Ram Nath Kovind and Opposition candidate Meira Kumar.

The long awaited day for the Presidential Elections finally comes, voting for the next President of India will be done today between 10:00 a.m. to 5:00 p.m. in room no 62 in the parliament. The two contenders contesting the polls are NDA candidate Ram Nath Kovind and non-NDA candidate Meira Kumar. The contenders need more than 50% of the votes to win.

The electoral college elects the President, which comprises of all elected members of Parliament and the members of the legislative assemblies of all states, as well as of the union territories of Delhi and Puducherry. There is a total of 10,98,903 votes, with each parliamentarian vote carrying the value of 708. The vote value is calculated on the basis of the population of the state he or she represents. The contender needs a minimum of 5,49,452 votes to win.

Though the victory of Kovind is inevitable, Congress Chief Sonia Gandhi said that it is a fight of the clash of ideas, and a conflict of disparate values and even if the numbers are against them the opposition will put up a hard fight.

Almost 40 parties including many from outside the NDA will be voting for NDA candidate, Ram Nath Kovind. Other than NDA the parties voting for Kovind are JDU, AIADMK, the Yuvajana Shramika Rythu Congress Party, the Biju Janata Dal, the Telangana Rashtra Samithi and the Indian National Lok Dal. Calculating the votes for Kovind, he is almost getting 60% of the total votes, already making him the winner.

On the other hand opposition candidate, Meira Kumar is getting a little over 39%, way below the 50 percent mark, needed for the victory. Parties supporting Kumar are Congress, of course, as well as of the Nationalist Congress Party, the Samajwadi Party, the Bahujan Samajwadi Party, the Aam Aadmi Party (AAP), the Rashtriya Janata Dal, the All India Trinamool Congress, the Communist parties, the DMK, and the Jammu and Kashmir National Conference.

The voting will be done through the secret ballot system. Paper ballots will be used and the votes will be valid only if a special violet ink pen is used to vote. The MPs will vote on green ballots and the MLAs will vote on pink ballots. Parliamentarians will vote according to tables allocated to the States they represent. There will be six tables. The PM, Congress president Sonia and Congress vice-president Rahul Gandhi will vote on table number 6. And MLAs who have chosen to vote in Delhi will do so from table number 1.

All the ballot boxes from other states will also be flown by 19 July and stored in room no 62. The counting will be done on 20 July and the results will also be announced on the same day. The new President will assume office on 24 July as Incumbent President Pranab Mukherjee vacates his office.

Following the Presidential elections, the Vice-Presidential elections will be held on Aug 5. Non-NDA parties have announced Gopal Krishna Gandhi as their candidate and he will be filing the nomination on 18 July. NDA is yet to decide on its candidate, which will be finalized most probably after a BJP parliamentary board meeting on Monday.