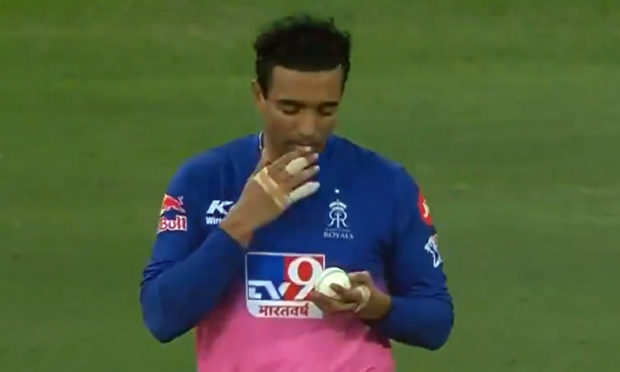 It has been reported that Robin Uthappa has violated the ICC’s Covid-19 protocol by applying saliva to the cricket ball while fielding against the Knight Riders.

The video of the incident has gone viral as Uthappa was seen applying saliva to the match ball after he had missed the catch of Sunil Narine which was the fifth bowl of the third over.

The incident has not been updated by the IPL so far.

Due to the Covid-19 pandemic ICC had initiated new rules by banning the use of saliva on the cricket ball. On the other hand, it is reported that if a player is found applying saliva to the match ball then the umpire would deal with the situation leniently but would result in a warning to the whole team as stated by the  Standard Operating Procedure for the game.

According to a notification from ICC, it is suggested that a team will be given two warning per innings on the use of saliva on the match ball and in case of things getting out of hand then the opposing team will be benefitted with 5 extra runs. Lastly, it is conveyed to the umpires to clear the ball before use if saliva is applied to it.

However, this didn’t stop the Kolkata knight Riders from winning the match as they won by 37 runs which took them to 2nd position on the points table.