Aquvio, a Varanasi-based, water health tech startup, has raised an undisclosed amount as part of its pre-Series A round from the Technology Development Board, Govt of India, along with two other angel investors.

It is planning to reach pan India by 2022, the company said in a statement.

“Everyone has the right to sufficient, continuous, safe, acceptable, physically accessible, and affordable water for personal and domestic use. In 2010, the UN General Assembly explicitly recognised the human right to water and sanitation,” the company said.

Incubated at Malviya Centre for Innovation, Incubation and Entrepreneurship (MCIIE) in Varanasi, the startup was founded by Naveen Kumar and Rohit Kumar Mittal.

The startup said it hopes to build disrupting technologies to provide access to safe water, sanitation, sustainable use of water, and also generate employment opportunities. Aquvio works on water purification and treatment.

With its work, Aquvio claims that it is achieving three of the 17 sustainable development goals (SDG) laid down by the United Nations Development Program (UNDP) – good health and well-being, clean water and sanitation, and climate action.

According to Aquvio, its revenue has clocked in over Rs 10 million and has sold more than 100 units of the product. It was recognised by the ‘Startup India and Standup India’ scheme by the government as well as the United Nations.

Currently present in Delhi NCR, Uttar Pradesh and Haryana, its water purifier technology come in variants of 25 litres per hour (LPH), 50 LPH, 100 LPH and others with in-built water coolers.

Some of the water health startups in India includes Uravu, Swajal Water ATM, Piramal Sarvjal, WAAH, AMRIT, and many more. 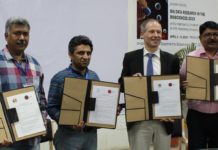