It is India’s 72nd Constitution Day. A remarkable journey for a Nation that was doomed to fall into anarchy, by many experts at the time.

Commemorating the day has been very easy but brushing up the very lessons learnt from it has been difficult to endure and although the stories may be different now, these lessons can still resonate the Indian lives.

This day, also known by the names Samvidhan Divas or National Law Day, aims to celebrate and raise awareness among the country’s new generation, about the constituents, challenges and treasures enclosed within the Indian Constitution.

It also comes as a reminder to acknowledge the struggles and contributions made for the successful framing of one of the lengthiest Constitutions of the World, a sui-generis model of just a right balance between rigidity and flexibility, conservatism and rationalism etc.

It marks as an endeavor to enlighten people about the ‘basic features’ those this book cherishes: sovereignty and not suzerainty, the elaborate freedoms, to live, to speak, move, share, the unbiased characteristic it reflects onto us, is a matter of pride any day.

Various activities including Talks, Webinars, festivities, Preamble Read etc., are organized on this day focusing on the bedrock of values of the Indian Constitution.

What is the difference between 26th November and 26th January?

It was on 26th November, 1949 that the country adopted its Constitution including the Preamble that acts like a Preface to the Constitution, though it came into force on Jan 26th, 1950.

How we came till here?

It all began with the demand of Swaraj or self-rule, though it meant differently for different people even within the Congress. For some it meant complete authority, for others it meant comparatively more collective freedom.

Then in 1929, Mr. Jawahar Lal Nehru declared the aim of ‘Poorna Swaraj’ at Lahore Session and wrote: “Every vote that we gave became a message of farewell to ease and comfort and domestic happiness and the intercourse of friends, and an invitation to lonely days and nights and physical and mental distress.” 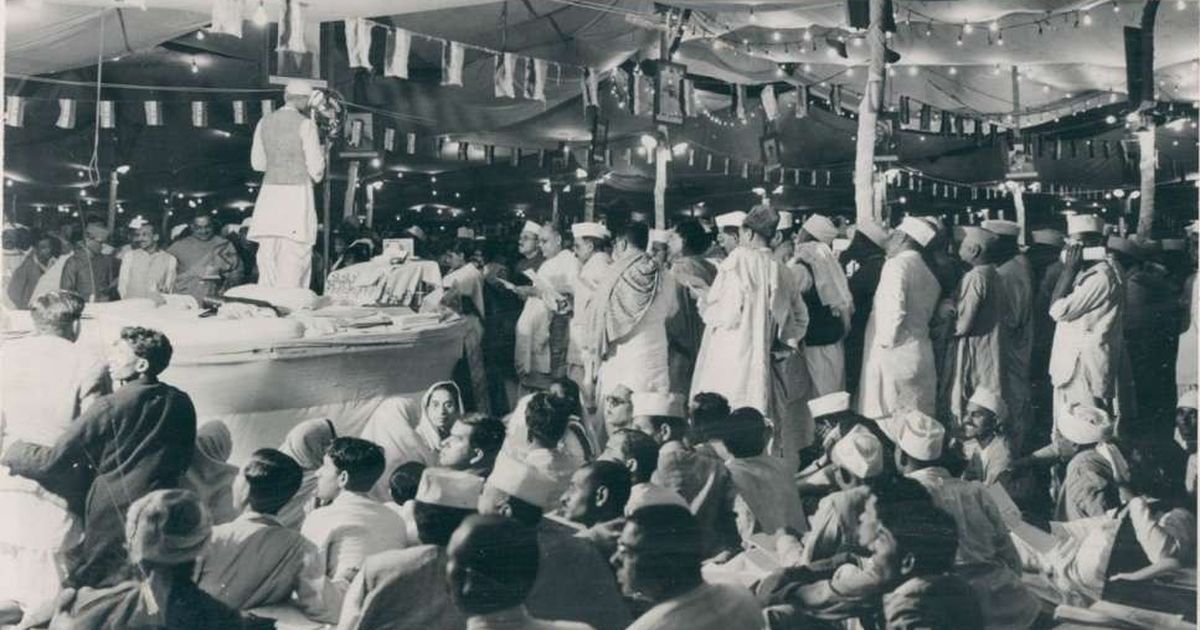 The tricolor was hoisted on the banks of the Ravi River giving birth to a new India in the chilly winds of Lahore for demanding the complete self-rule.

Henceforth, the date was set for independence to be the 26th of January, 1930 and the day came to be celebrated as Poorna Swaraj day for the next 17 years till Independence.

Again, in 1934, the demand for a Constituent Assembly to frame the Indian Constitution was made by M.N. Roy, a communist party leader. His idea was turned into wonders by the Congress party and finally, in 1940, the British government accepted the same.

On 29 August 1947, a Drafting Committee was constituted to prepare a Draft Constitution for India with Dr. B.R. Ambedkar as its Chairman.

With multiple public discussions, rejected drafts, endless debates, the Committee finished their work 26 November, 1949. This long drawn procedure took around 2years, 11 months, and 17 days for complete placement of the document.

Finally, in the beginning 1950s, the committee members could then sign two handwritten copies of the document, one in Hindi and other in English.

What significance it has for common people?

As per the great Historian of his time and beyond Granville Austin: The Constitution drafted by Ambedkar was the ‘first and foremost a social document’.

In the current times, when India is witnessing change and almost been battered with climate change impacts, Pandemic, economic instability and politically-motivated attitude, the Constitution and the story of its struggle seems more relevant than ever.

Our fellow countrymen feeling segregated, tensed, disappointed, at times helpless and even infuriated, may find help within this document, a holy grail for the country.

We need to be united more than ever, because we shall know that our enemy is not the mere countries at our borders, rather a bigger evil waiting in future, to seal revenge.

Constitution: For the sake of Environment

Certain provisions of the Indian constitution also talk of the environment protection along with the need for dynamic nature and growth potential for the land of our own.

This lies intrinsic to the very ‘Right to life’ guaranteed by the Indian Constitution because a decent living Standard and pollution free environment are co-terminus.

An environment, as per the Environment (Protection) Act, is defined as “including water, air and land and the interrelationship which exists among and between air, water and land and human beings, other living creatures, plants, micro-organism and property”.

Therefore, drawing its basis from Article 51-A (g), “It shall be duty of every citizen of India to protect and improve the natural environment including forests, lakes, rivers and wild life and to have compassion for living creatures.”

The improvement of public health which is subject to the authority of Government, also includes the protection and improvement of environment because it is considered that without it, public health cannot be assured (composing Article 47). Even article 48-A stresses on the same.

The constitution of India, when read under Article 19 (1) (a) along with Article 21 of the constitution can definitely guarantee the right to a decent environment, cases like PA Jacob vs. The Superintendent of Police Kottayam sheds light on it.

The Vellore Citizens Welfare Forum vs. Union of India (1996) 5 SCC 647 case saw the Court observing and defining “the Precautionary Principle” and “the Polluter Pays Principle” which are themselves essential pre-requisites for a meaningful “Sustainable Development.”

This happens because Nature has always been closer to our hearts, a part of our culture and a thing of worship for most of us.

This knowledge of constitutional provisions on this day also includes the regards for the Natural beauty we find in our country, that sustains us and help us grow.