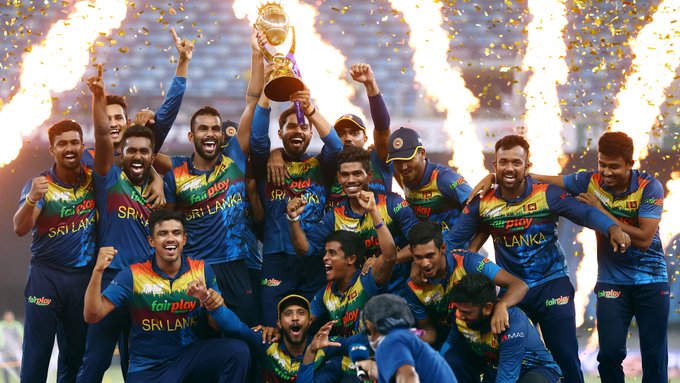 Sri Lanka does the impossible by beating Pakistan in a thrilling Asia Cup final match by 23 runs.

Pakistan, after winning the toss, elected to bowl first.

In all the matches played till now in the Asia Cup, it’s been seen that most matches have been won by the team batting second.

Only three matches were won by the team batting first. The first two were against Hong Kong, which was played by India and Pakistan.

The remaining match was the one in which Virat Kohli smashed an outstanding hundred against Afghanistan.

However, batting first, SL openers weren’t able to give them a good start.

SL lost their first five wickets before the ninth over itself.

They were in great trouble, and it felt like Pakistan was going to have an easy final victory.

When Bhanuka Rajapaksa, standing alone in the middle, started to handle the situation.

Wanindu Hasaranga de Silva tried to help him out as he contributed 36 runs to the total.

Bhanuka Single Handley played a knock of 71 runs and brought SL to a fighting score of 170 for the loss of six wickets.

In return, Pakistan’s opening batsman tried to make a partnership and win the match.

Pramod Madushan Liyanagamage didn’t let that happen as he took two back-to-back wickets in the third over.

Apart from good bowling the Sri Lankan players also tried their best to not give even a single unwanted run.

After that, Wanindu Hasaranga de Silva took two major wickets in the 16th over.

When everything was going well for the Pakistan side, Hasaranga took the moment from them.

Through outstanding bowling and batting, SL won the match by 23 runs as they also won the Asia Cup for the sixth time.

The team of youngsters is setting the bar high as they lift the Asia Cup trophy.

Bhanuka was named Player of the Match, while Wanindu Hasaranga de Silva was named Match of the Series for his nine wickets and 66 runs.